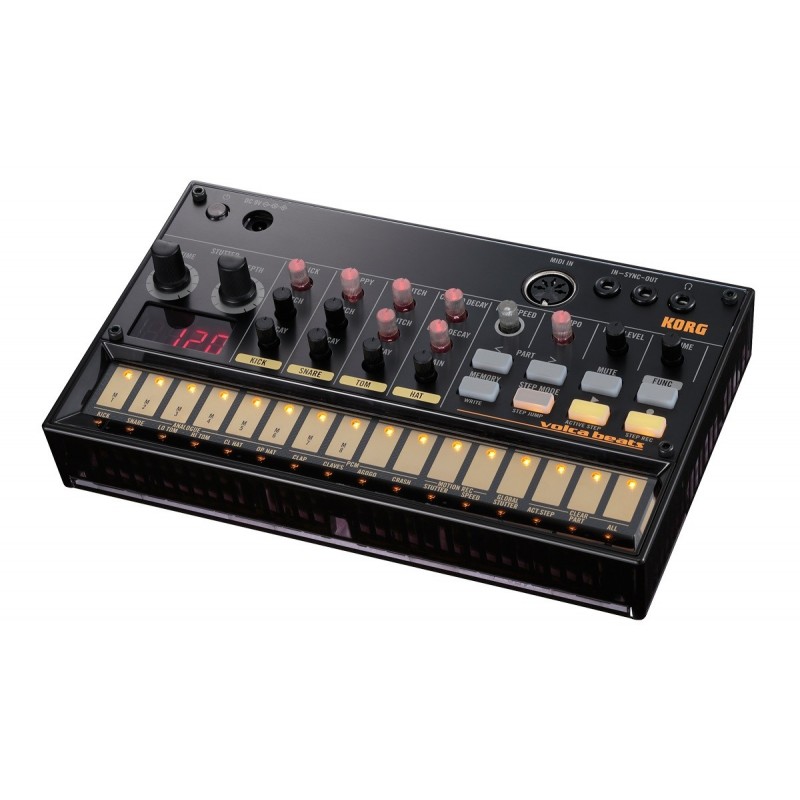 Even today, more than thirty years after the age dominated by analog synthesizers, we just can't let go of the sound of analog rhythm machines. Those thick sounds have the power to stand up to guitar and acoustic drums, and are still indispensable for track-making or live performance. The volca beats gives you those analog drums plus the easy-to-use step sequencer of the Electribe; it lets you turn your inspiration into reality and generate beats with the best high quality sounds.

Following in the footsteps of the monotron, monotribe, and MS-20 Mini analog synthesizers, Korg announces the Volca series. Volca is a new lineup of EDM production tools comprised of three distinct models: the Volca Keys lead synthesizer, the volca Bass synthesizer, and the Volca Beats rhythm machine. These powerful and fun-to-use true-analog devices deliver a diverse array of fat sounds that can be obtained only from an analog synthesizer. Each is also equipped with sequencing/recording capabilities for intuitively generating performances. Multiple volcas can be used in tandem via the vintage-style sync in/out, and with your favorite DAW software or MIDI keyboard via MIDI In. Battery operation and built-in speakers mean that you can conveniently play anywhere and anytime. These are the next-generation analog synthesizers, bringing you the ultimate sounds and grooves with ease and depth. Whether used together or by themselves, the volca series is poised to inject true analog power into any performance or studio setup.

The volca beats provides six of the sounds for which the greatness of analog shines most clearly: Kick, Snare, Hi Tom, Lo Tom, Closed Hi Hat, and Open Hi Hat. Paying careful attention to the standard sounds that are indispensable for dance music and that are included on numerous synthesizers and sampling CDs, we've designed powerful new sounds that could not be produced by any means other than analog.

Maximum impact from minimal parameters - a unique advantage of analog

The volca beats provides a carefully selected minimal set of parameters that let you quickly create the drum sound you want. For example, simply by using the three knobs Click, Pitch, and Decay, you can create an incredible variety of kick sounds, ranging from rough sounds that dominate the low range to tight sounds that keep a precise beat.
Regardless of the settings, all of these sounds will have great presence and density, and will deliver the convincing power that's possible only from an analog sound generator.

PCM sound engine covers sounds for which analog is unsuited

The PCM sound engine is used to cover sounds for which an analog synth is unsuited, such as Clap, Claves, Agogo, and Crash. We've also paid attention to the PCM engine, and have reproduced the rough lo-fi sound of the '80s. These sounds are a good match with the analog drums, and you can also create even more distinctive sounds by changing the PCM Speed to dramatically raise or lower the pitch.

Loop sequencer distilled from the Electribe

This step sequencer is designed to make editing easy and to let you add or remove parts in an improvisational way. You can use the 16 step keys to intuitively enter notes while visually monitoring the timing of the notes within the measure. You can also play the touch panel keyboard to record in real time.
Up to eight sequence patterns you create can be stored in internal memory.

You can use the Stutter function to dramatically expand your live performance possibilities by adding drum rolls or delay-like effects. It can be used to completely transform the feel of the entire pattern, or as a fill when switching patterns. Movements of the Stutter knob can also be recorded in a sequence.

The Active Step function lets you skip a step during sequence playback; the Step Jump function instantly plays only the step you're pressing. It can create effects similar to a short loop or unexpectedly irregular rhythms, allowing dynamic performances just as though you were performing the sequence itself.

Convenient functions for greater ease of use

By using the sync jack you can enjoy synchronized playback with multiple volcas or with a monotribe. You can also use the "SyncKontrol" iPhone app to wirelessly control tap tempo, swing settings, and synchronized playback with iOS music apps via WIST.
The MIDI IN connector lets you synchronize with other devices as well as play the volca from your MIDI keyboard. You can also send note messages from your DAW and use the volca as an analog sound module.

With its compact size, battery operation, and built-in speaker, it's easy to take the volca anywhere and perform any time.