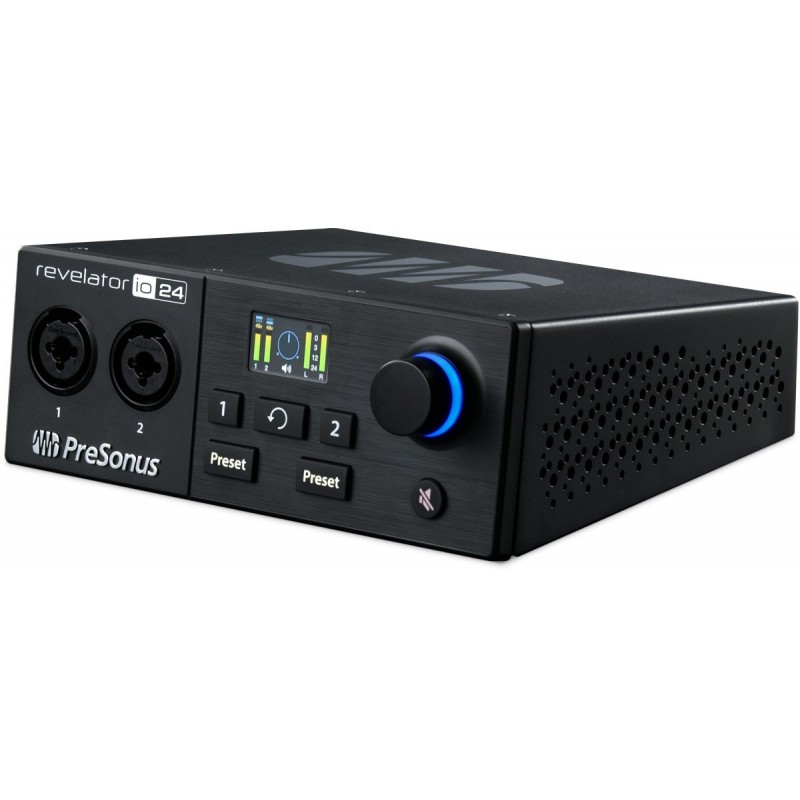 Flexible and versatile, Revelator io24 is the only audio interface designed for both recording and streaming. Get polished, professional results thanks to PreSonus XMAX-L microphone preamps and onboard processing that will make your stream, podcast, or recording stand out. Revelator io24’s intuitive loopback mixer makes adding backing tracks, sound effects, or Skype interviews quick and easy. Produce a great mix for your stream fast with Stream Mix mode. Whether you’re producing your latest YouTube video or streaming your music live on Facebook, Revelator io24 is your partner from studio to stream.

Revelator io24’s simple loopback mixer makes it easy to add backing tracks to your live stream performance or conference in a Zoom caller to your podcast. With two dedicated stereo channels just for loopback audio on both macOS ®and Windows®, you’ll mix and record the audio from two different applications, along with both channels of your Revelator io24—all at the same time. Stream and record to Studio One® (or your application of choice) simultaneously.

Only Revelator io24 is both an audio interface and a streaming mixer. Out of the box, Revelator io24 is a great-sounding audio interface with powerful onboard DSP (digital signal processing). When you’re ready to stream, engage Stream Mix mode—and with the click of a button, your complete mix of your analog inputs, loopback channels, reverb, and effects is routed directly to USB, where you can easily send it to your streaming software. No complex routing or extra hardware required.

Polish your sound with dedicated onboard processing featuring the same State-Space Modeled sonic enhancements as our award-winning StudioLive® Series III mixers. Professionally crafted presets make your voice or guitar stand out with a single click. Additional effects let you emulate concert halls, AM radio, or Venusian armadas to completely transform your sound.

More than 25 years of studio-grade design experience is inside Revelator io24. Two XMAX-L mic preamps capture even the most complex musical harmonics smoothly and naturally, with no audible distortion, so your microphones will sound their best. Instrument and line inputs let you connect all of your gear. A Stereo Link option provides even more flexibility.

Want to take your sound with you on a gig or go mobile with an SD recorder or just your camera? No problem. Just save your favorite presets onboard your Revelator, and you can use its preamps and your customized settings just like you would on your computer. Because the processing is built into the Revelator io24, you’ll have your presets wherever sound takes you.

Wireless remote control via UC Surface for iPadOS®, Windows®, and Android™ devices means you get touchscreen control over all of your Revelator io24’s features. Your processing and loopback mixes are at your fingertips. Just connect your favorite tablet to the same network as your computer, and you’re good to go.When you have the right tools, any job is faster and easier to finish. That’s why we included high-resolution input and output metering on the Revelator io24, allowing you to keep an eye on your input and mix levels when you’re recording by yourself.

Revelator io24’s easy-to-use mixer also lets you create a custom zero-latency monitor mix fast. Independent levels for the Headphone and Main outputs (plus a Mute option for the latter) make it easy to switch between mixing on studio speakers and monitoring on headphones. You can even create a separate mix just for your headphones! MIDI In and Out ports let you connect MIDI controllers and external hardware synthesizers and drum machines.

PreSonus have included their Studio One® Artist production and recording software, which makes it easy to polish your recordings with its lightning-fast drag-and-drop workflow and full-featured production environment. Whether you’re recording a complete album or just adding bumpers to your podcasts, Revelator io24 and Studio One Artist give you everything you need to get professional results.

The PreSonus Revelator io24 is natively compatible with Apple Silicon M1-based Mac computers*, as well as iOS and iPadOS devices, including iPad Pro, iPad, iPad Air, iPad Mini, iPod Touch, and iPhone. Because it's USB class-compliant, there are no special drivers or applications to download and install. You'll be able to produce on the go—everything from podcasts to folk rock to trap—wherever sound takes you.

*Universal Control 3.4.2 or later is required for Native M1 compatibility.